To upgrade to the latest version of Kubla Cubed 2021 6.2, open your installed application and click Download Now.

You will then install the latest fixes, updates and features, including the linear Offset Tool.

If you have a Perpetual License (2019 or earlier) and would like to upgrade to Kubla Cubed 2021, please contact sales@kublasoftware.com.

Ted will be hosting a 15 minute talk at Digital Construction Week. The details are below:

Also, visit the Kubla team at stand E52.  You can register to attend Digital Construction Week in London, by clicking the banner below.

SPARKies 2021 Shortlisted | Most Innovative Use of Tech Award

The SPARKies tech and digital awards 2021 final shortlist has been announced and the Kubla team is thrilled to be short-listed for this year’s ‘Most Innovative use of Tech’ award!

Congratulations to all the great businesses and individuals that have made it on the list!

Check out all the nominees at the link below:

What a year 2021 has been for technological advancements, so far; COVID19 vaccines developed, tourists going into space, and now Kubla Cubed Professional 2021 released!!

Watch the launch webinar video below, to see the great new tools in action.  Plus, find a summary of the updates below.

Relative elevations are dependent. For example: the level of the trench is input as 0.5m depth

Absolute elevations are independent. For example: the level of the platform is set as 280m as the finished level of that element

Renaming of Strip and Spread

The Strip element has been renamed to Reduce, as it makes more sense considering it is used for a lot of scenarios, not only for topsoil stripping.

The Spread element has been renamed to Raise. Used to increase the grade. Similar to Strip, it was felt ‘Raise’ is a better more generic name for the operation, which is not solely associated with topsoil re-spread.

Consistent Editing Menu for all Elements

All elements are now all edited in the same editor window as a Feature Surface.

CAD File as a Site Plan

The option to add DWG/DXF files is now available to everyone.

The CAD file import option is in the Plans menu, in the same drop down as adding a PDF/Image.

Have two contour or break lines which has been imported with a gap (due to text)?  You can now join two or more contours and set the elevation using the new joining tool.

This is useful for fixing contour lines label gaps, imported from CAD

Split a contour or break-line into two or more new lines.

You’ve extracted contours from your PDF or CAD file but the lines don’t have any Z values (levels show as 0.00). Update multiple contours in one operation.

= Kubla Cubed will generate the levels for all the contours selected.

Define a path or simple road defining the centreline with absolute elevations.

Define a trench with a centreline, using relative depth elevations.

Define a berm with a centreline, using relative height elevations.

New ‘Depths From’ or ‘Heights From’ option added to relative elements. There are three options: from ‘Ground‘, ‘Previous Element‘ and ‘Specified Element‘.

This allows relative elements like ‘Reduce‘ (previously named Strip) to have depths specified directly from ‘Ground‘, rather than the previous element in the calculation order.

‘Previous Element‘ (the behaviour in Kubla Cubed 2015, 2016, 2017, 2019) is there for backward compatibility reasons, and some custom scenarios that it may be useful for.

‘Specified Element‘ will be the new recommended method for doing the ‘Reduce Method‘ subgrade adjustment.  First, you will do your FFL levels in one Feature Surface, and then set the ‘Depths From‘ to be from that element. It will allow the strips/reduced areas to replace each other where they intersect and act and still act on the lower down element.

A big improvement, I think, in both workflows.

The default will have ‘Auto’ turned on which will automatically reduce from ‘Ground‘ for the Reduce tool, like the absolute elements, which is useful in a lot of scenarios.

You can turn this off if you want to calculate from a different option.

Breakdown of Elements by Regions

Exporting your volume results from Kubla Cubed as a spreadsheet has never been more detailed.

We have enhanced the ‘Breakdown By Element’ section in the earthworks report and spreadsheet. Previously elements that intersected in the same phase were reported in a single cluster.

To get further granularity in the earthworks break-down it was required to use the ‘air gap’ method or use volume regions. Both these techniques were time consuming and problematic. We have upgraded the element breakdown so that when there are intersections, the lowest element in the calculation order reports the cut\fill.

Technically, it is the last element to have modified a triangle in a TIN that reports the cut\fill of that triangle.

This is just the first edition of Kubla Cubed 2021!

We are continually working to develop the software and looking to improving it’s engine as well as adding new features, some of which we have already begun creating.

Here are a few tools in the pipeline:

I'm a Subscription License Holder, how do I upgrade?

Simply, open Kubla Cubed 2019 from your desktop and you will see a pop up window asking you to Download Now!  Click the button and follow the on screen instructions.

I'm a Perpetual License Holder, how do I upgrade?

As a Perpetual user, you should have received an email from us with a link to upgrade to Kubla Cubed 2021.

If you have not received an email, please contact support@kublasoftware.com

I don't have a Kubla Cubed license, how do I buy the software?

Go to our Prices page.
Click “Buy” for the license you wish to purchase and follow the instructions.

I have created projects in an older version of Kubla Cubed, are they compatible in 2021?

Yes. Projects from a previous release of Kubla Cubed should open with no problems in 2021.

However, projects you’ve created in 2021 are not compatible in older releases of the software.

Please email support@kublasoftware.com with you project file, if you aren’t getting the expected results. 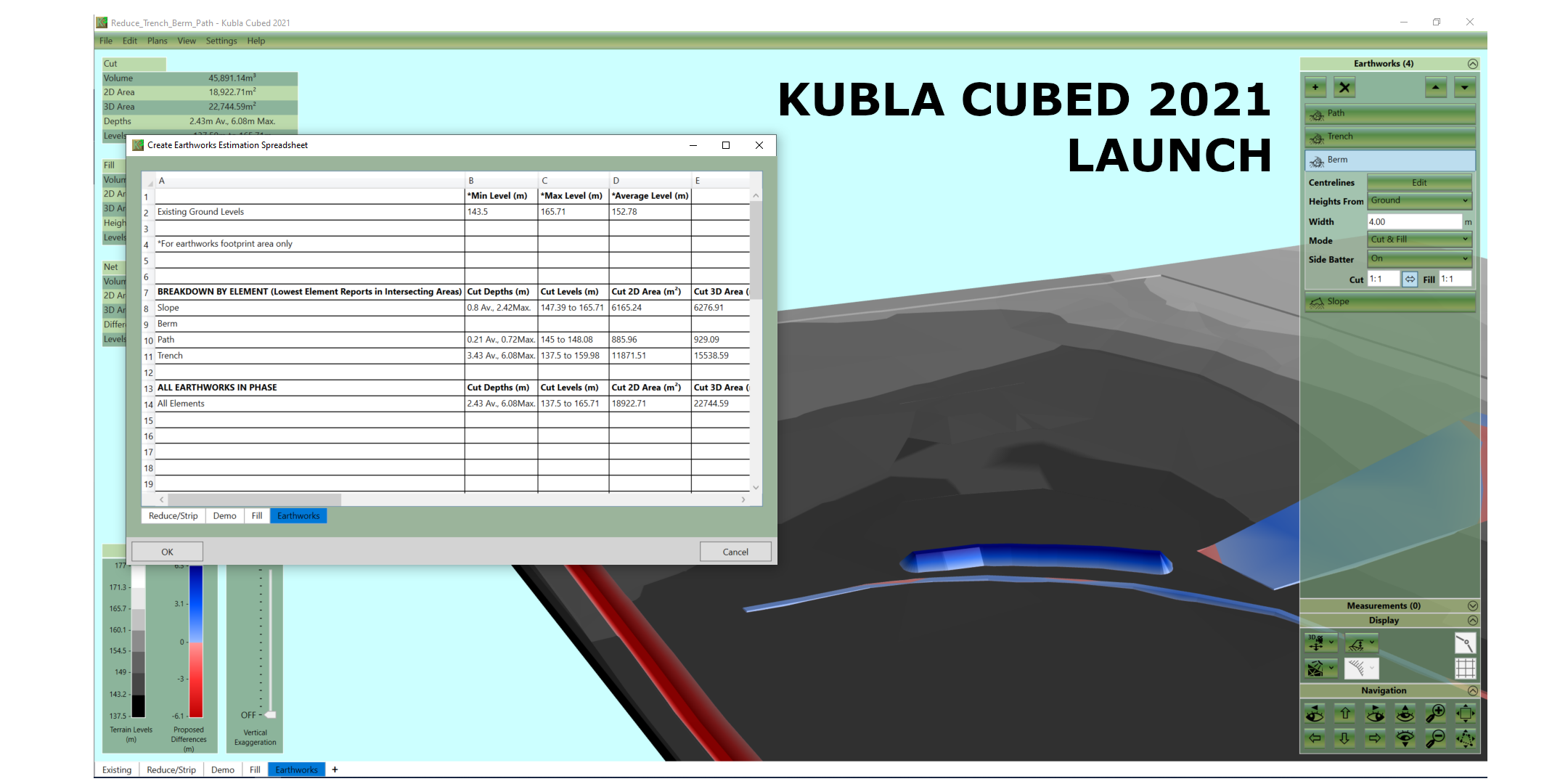 The much anticipated Kubla Cubed 2021 is launching on Thursday 15th July!

Due to a variety reasons, including COVID 19 disruptions, there has been some delay in the development and release of this year’s edition of our earthworks estimation software, Kubla Cubed.

We are glad that we now have a launch date and we will be hosting two webinars to run through the new features and updates to current features.

To register for the event, click on the links below:

We hope you can join us live but if you can’t make it you will be able to watch it back, on YouTube, at a later date.

Follow us on social media, to stay in the Kubla Software loop.